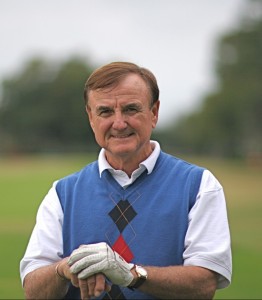 Wally Armstrong, President of Gator Golf Enterprises, Inc., has played professionally and taught golf since 1968, and has conducted clinics and teaching seminars throughout the world.  A graduate of the University of Florida, where he earned both a bachelor’s and master’s degree in Education, Armstrong was a member of the college golf team and earned All-American recognition in 1966.

A PGA member since 1974, he has competed in more than 300 PGA Tour events. In his first Masters he finished fifth setting a rookie record score of 8 under par. He competed in numerous majors including the British Open, Masters, U.S. Open, PGA Championship and the Tournament Players Championship . During his career Armstrong was a solid frontrunner on the PGA Tour and led in over 30 tournaments, finishing second 4 times and one year finishing 7 times in the top ten. Because of his exceptionally consistent record, he was awarded a lifetime membership to the PGA Tour. In recent years he has played in some US and European Senior Tour Events.

In the last 20 years Wally has concentrated on golf instruction producing 22 golf instructional videotapes selling over 500,000 copies, including a 6-tape video training library for coaches and teachers that include over 300 creative teaching aids and drills. His best selling Golf for Kids of all Ages was the first tape for kids and dads. His production Beginning Golf for Women, featuring Donna White, is a nationally leading women’s instructional tape. In 1995, Wally and his then 10-year-old son, Blake, produced the first golf instructional kid&rsquo;s video taught by a kid, Power Drives for Kids. This tape was included within a junior golf T-Rex club package developed by Titleist and distributed worldwide.

As an indication of the worldwide respect Wally enjoys, he was selected from all the PGA pros to be the “golf expert” to teach singer Kenny Rogers and broadcaster Pat Summerall on the highly acclaimed television infomercial Maximizing Your Game. This Max Pack of videos and training aids, including his renowned hanger and tempo ball, featured Wally doing what he does perhaps better then anyone-helping players get better while keeping golf fun. It sold over 110,000 units.

Armstrong is best noted for teaching the feel of the golf game by the use of familiar objects such as brooms, mops, footballs, Hula-Hoops, hangers, etc. His unique emphasis on visual imagery has proven to be a major breakthrough in the field of golf instruction. He has published articles in magazines across America, as well as Japan and Korea. He taught at the 1990 and 1992 PGA Teaching and Coaching Summits. He has done seminars for the National Golf Foundation of Japan, and conducted clinics in China, Korea, Venezuela, Honduras, Ireland, New Zealand, Australia, Canada and Mexico.

Wally was on the cover of Golf Magazine in May 1993 and Golf Week .He is also the co-author of three books with Jim Sheard, In His Grip, Playing the Game, and Finishing the Course. (Combining for sales of over 300,000 copies).  Wally&rsquo;s book The Heart of A Golfer was coauthored with Frank Martin. The First Tee Shot co-authored with Mike Yorkey is designed for parents and grandparents to equip them on getting kids into golf. It features a special 1-1/2 hr DVD of instruction with Wally and sons Scott and Blake. Wally’s latest book THE MULLIGAN written with co-author Ken Blanchard is his first short novel. See www.themulligan.org.